Is it possible to adapt computing models and software to exploit the full potential of GPUs?

In this article we talk about E4’s work within the European Organization for Nuclear Research (CERN) [1], where E4 has been a supplier of high-performance computing and storage systems for many years.

Since 2018, E4 is part of CERN openlab, a public-private partnership, through which CERN collaborates with ICT leading companies and other research institutions on R&D.

As a “contributor”, E4 has worked over these years, together with CERN researchers, on joint projects to promote the development of high-performance computing technologies in the field of high-energy physics. Particularly, E4 aims to meet the computing needs, arising from the experiments of the Large Hadron Collider (LHC) accelerator [2] and its high-brightness HL-LHC upgrade, through the use of GPU accelerated applications.

Researchers and engineers have been working on ten use cases, which were grouped into seven main areas in 2019:

7. Allen: a high level trigger on GPUs for LHCb

In this article we will start from the latest one, Allen, and we will deepen the other in future articles in our blog.

“Allen” [3] is an initiative to develop a comprehensive high-level trigger (the first step in the data filtering process after particle collisions) based on GPUs for the LHCb experiment [4]. This project has benefited both from support of CERN openlab, as well as of engineers and physicists from E4 and NVIDIA.

The new trigger system processes 40 Tb/s, using approximately 340 latest generation NVIDIA GPU cards. Allen, from a physics point of view, reconstructs particles with the same performance obtained with traditional CPUs. Furthermore, Allen not only can be used to perform reconstructions, but is also able to make decisions about whether to accept or reject events.

Using GPUs for the LHCb experiment has the following advantages, illustrated in Figure 1:

A wide range of algorithms have been efficiently implemented for the Allen architecture. Applications are written in C++ with CUDA extensions. When compiled on x86 architecture, the results between GPU and CPU differ at the permille level, perfectly acceptable for the needs of the experiment.

The above demonstrates the potential for GPUs to be used as “accelerators” in high-energy physics for high-frequency data processing. Indeed, Allen is the first high-throughput trigger system which will be implemented entirely using GPUs, with each GPU card reconstructing and making decisions on over 100,000 LHC collisions per second. As Allen has been developed from the outset as an experiment-independent processing framework, it could be used in the future in completely different fields, where a large and fast ability to select events is required.

Allen will be used by the LHCb experiment as the new architecture for the next LHC data take (Run 3), starting in 2021 [5]. 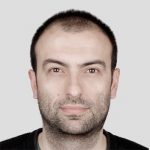